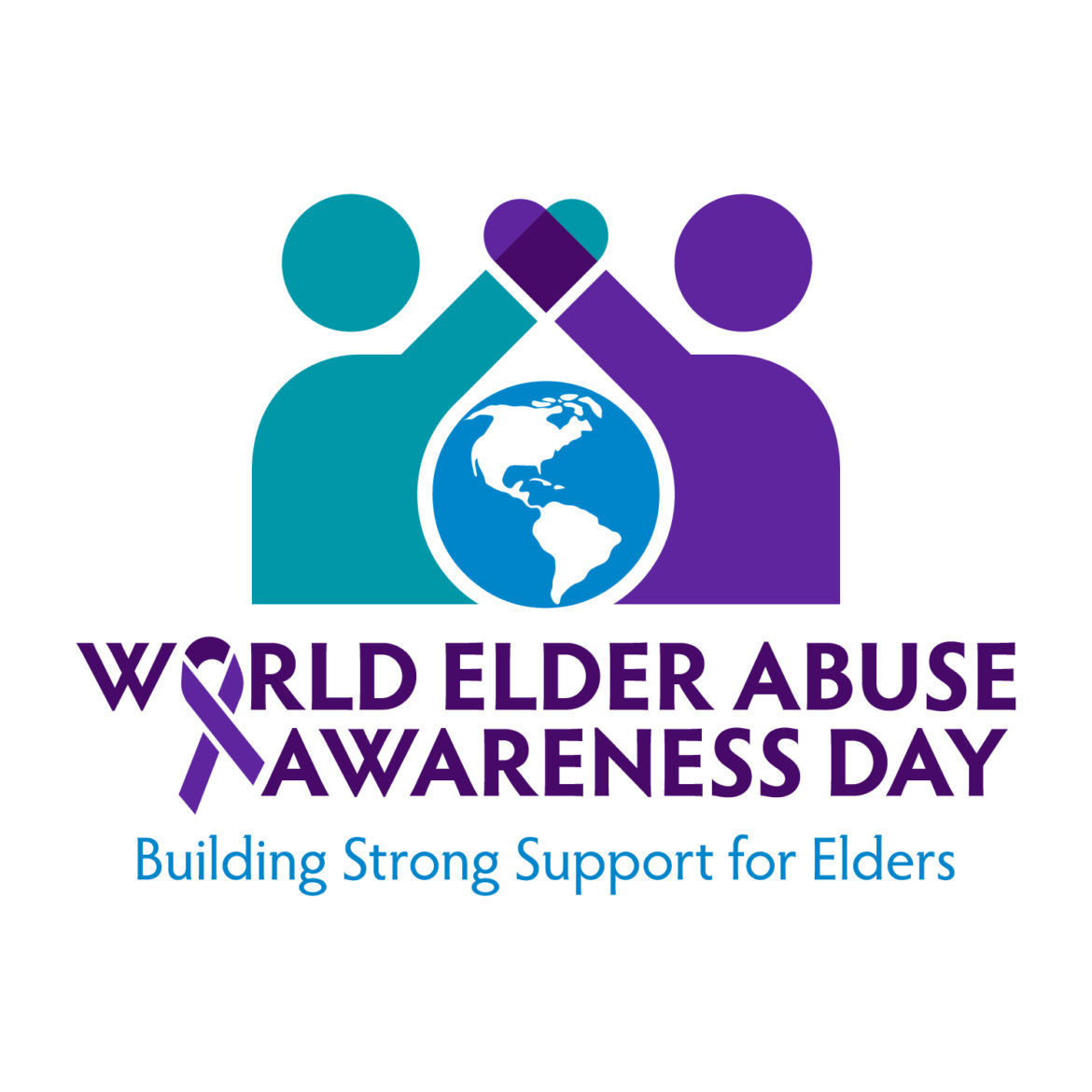 World Elder Abuse Awareness Day 2018 is held on June 15th and is an annual international UN observance day on the same date each year. The day came about as a result of UN resolution 66/127.

With a growing global population of elderly people, and as longevity increases, abuse of the elderly is an increasing and serious problem that affects health and human rights and can cause death, so it is vital to raise awareness of it and thus prevent it whenever and wherever possible.

Elder abuse is global and comes in many forms including physical, emotional, sexual and financial abuse and also neglect. Elderly people are human and deserve the same dignity and respect as people of all other age groups.

Elderly people are particularly vulnerable to abuse and to being unable to defend themselves and get help as fear and infirmity can be major barriers to seeking and getting help, and sometimes spotting and challenging abuse in the elderly isn’t easy, some are isolated having outlived family and friends, and some are abused in institutions where abuse is not spotted or is covered up, and in some cases the elderly are not given priority by authorities in abuse matters.

Why South Africa needs to discipline the private...

5 Things You Should Know About Stress

Is coffee good for you?

Difference and similarities between thyroid and parathyroid

How old can humans actually get?

There’s definately a lot to learn about this subject. I really like all the points you made.

Nice post. I learn something new and challenging on websites I stumbleupon on a daily basis. It’s always helpful to read through articles from other writers and practice something from other websites.

Everything is very open with a really clear clarification of the challenges. It was really informative. Your website is extremely helpful. Thank you for sharing!

An outstanding share! I have just forwarded this onto a colleague who had been conducting a little research on this. And he actually ordered me lunch simply because I found it for him… lol. So let me reword this…. Thank YOU for the meal!! But yeah, thanks for spending some time to talk about this topic here on your web page.

The very next time I read a blog, Hopefully it won’t fail me just as much as this particular one. I mean, Yes, it was my choice to read through, but I truly thought you’d have something interesting to talk about. All I hear is a bunch of crying about something you could possibly fix if you weren’t too busy looking for attention.

After I initially left a comment I seem to have clicked the -Notify me when new comments are added- checkbox and from now on each time a comment is added I get 4 emails with the exact same comment. Perhaps there is a means you can remove me from that service? Thanks a lot!

Hey there! I just would like to give you a big thumbs up for your great information you have got here on this post. I’ll be coming back to your website for more soon.

Good site you have got here.. Itís difficult to find high-quality writing like yours nowadays. I really appreciate individuals like you! Take care!!

Way cool! Some extremely valid points! I appreciate you writing this post and also the rest of the site is also really good.

Spot on with this write-up, I absolutely think this site needs much more attention. Iíll probably be returning to see more, thanks for the info!

Hi there! This is kind of off topic but I need some help from
an established blog. Is it hard to set up your own blog?
I’m not very techincal but I can figure things out
pretty quick. I’m thinking about making my own but I’m not sure where
to start. Do you have any ideas or suggestions?
Cheers

There is certainly a great deal to find out about this issue. I like all the points you’ve made.

Excellent web site you have got here.. Itís hard to find good quality writing like yours nowadays. I really appreciate people like you! Take care!!

Itís difficult to find knowledgeable people about this topic, however, you seem like you know what youíre talking about! Thanks

Saved as a favorite, I really like your blog!

After exploring a handful of the blog posts on your blog, I honestly appreciate your technique of writing a blog. I book marked it to my bookmark website list and will be checking back in the near future. Please check out my website as well and tell me what you think.

Pretty! This has been an extremely wonderful article. Many thanks for supplying this info.

I blog quite often and I really thank you for your content. This article has truly peaked my interest. I will take a note of your site and keep checking for new details about once a week. I subscribed to your RSS feed too.

Hello there! This article couldnít be written any better! Looking at this article reminds me of my previous roommate! He continually kept talking about this. I’ll send this information to him. Fairly certain he’ll have a very good read. I appreciate you for sharing!

Can I just say what a comfort to find someone that actually understands what they are discussing on the net. You definitely know how to bring an issue to light and make it important. More people have to check this out and understand this side of your story. It’s surprising you are not more popular given that you surely have the gift.

May I simply just say what a relief to find an individual who genuinely knows what they’re discussing on the internet. You definitely realize how to bring a problem to light and make it important. More people really need to check this out and understand this side of the story. I can’t believe you’re not more popular since you definitely possess the gift.

This is a great tip particularly to those new to the blogosphere. Short but very precise infoÖ Appreciate your sharing this one. A must read article!

Way cool! Some very valid points! I appreciate you penning this article and also the rest of the website is also very good.

This is a topic which is near to my heart… Take care! Exactly where are your contact details though?

Itís hard to find experienced people for this topic, but you sound like you know what youíre talking about! Thanks

Oh my goodness! Awesome article dude! Many thanks, However I am having difficulties with your RSS. I donít know the reason why I cannot subscribe to it. Is there anybody having identical RSS issues? Anyone that knows the solution will you kindly respond? Thanks!!

I enjoy reading an article that will make men and women think. Also, many thanks for allowing for me to comment!

Nice post. I learn something totally new and challenging on websites I stumbleupon every day. It’s always interesting to read through content from other writers and use something from their websites.

Hi there, I think your blog may be having internet browser compatibility problems. Whenever I look at your blog in Safari, it looks fine however, when opening in IE, it’s got some overlapping issues. I just wanted to provide you with a quick heads up! Apart from that, excellent blog!

Way cool! Some very valid points! I appreciate you writing this post and also the rest of the website is very good.

This is the right blog for anybody who hopes to find out about this topic. You understand a whole lot its almost hard to argue with you (not that I actually will need toÖHaHa). You certainly put a fresh spin on a topic which has been discussed for decades. Wonderful stuff, just excellent!

This is a very good tip particularly to those new to the blogosphere. Brief but very precise infoÖ Thanks for sharing this one. A must read article!

An interesting discussion is worth comment. I do believe that you need to write more on this subject matter, it may not be a taboo matter but typically folks don’t speak about such topics. To the next! Cheers!!

Good information. Lucky me I found your site by accident (stumbleupon). I’ve book marked it for later!

Saved as a favorite, I like your web site!

You need to take part in a contest for one of the most useful sites on the net. I most certainly will highly recommend this web site!

This page definitely has all of the information I wanted about this subject and didnít know who to ask.

This is a great tip especially to those fresh to the blogosphere. Brief but very precise infoÖ Thanks for sharing this one. A must read post!

Very good information. Lucky me I recently found your site by chance (stumbleupon). I have book marked it for later!

Next time I read a blog, I hope that it does not disappoint me just as much as this one. I mean, I know it was my choice to read through, however I truly believed you’d have something helpful to talk about. All I hear is a bunch of crying about something you could possibly fix if you weren’t too busy looking for attention.

This is a topic which is close to my heart… Cheers! Where are your contact details though?

This is the perfect web site for anyone who wishes to find out about this topic. You understand a whole lot its almost hard to argue with you (not that I really will need toÖHaHa). You definitely put a fresh spin on a topic which has been discussed for many years. Great stuff, just wonderful!

You’ve made some good points there. I looked on the net for more information about the issue and found most people will go along with your views on this website.

I used to be able to find good info from your content.

I was able to find good information from your blog posts.

Everyone loves it when folks come together and share thoughts. Great site, keep it up!

Way cool! Some extremely valid points! I appreciate you penning this article and also the rest of the site is very good.

I wanted to thank you for this fantastic read!! I absolutely loved every bit of it. I’ve got you book marked to look at new stuff you postÖ

Hello there! I just wish to offer you a huge thumbs up for the great information you have got here on this post. I’ll be coming back to your blog for more soon.

You’ve made some good points there. I checked on the net to learn more about the issue and found most individuals will go along with your views on this site.

Good site you have here.. Itís difficult to find excellent writing like yours these days. I honestly appreciate people like you! Take care!!

I used to be able to find good info from your articles.

Itís hard to come by educated people about this subject, however, you sound like you know what youíre talking about! Thanks